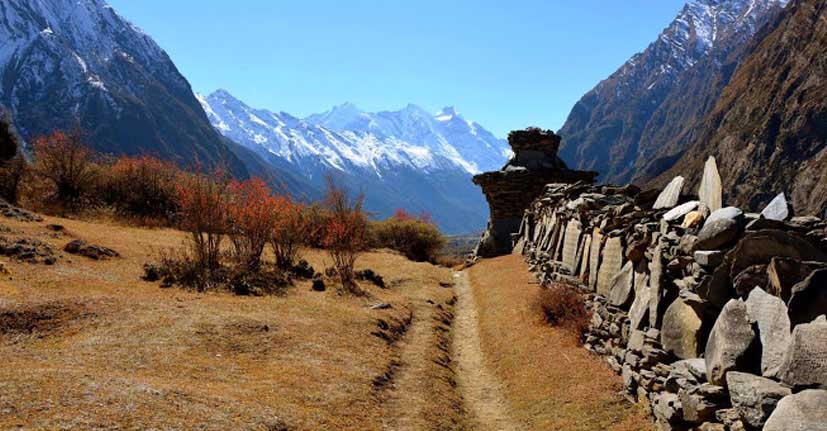 Tsum valley Nepal is a mysterious hidden treasure that beholds myth, mystery, and majestic beauty. Being one of the world’s most remote Himalayan valleys, Tsum trek Nepal is a big deal. Exploring the secret Tibetan Buddhist land’s culture and the natural surrounding an is an entirely different experience from any other region you have ever visited. Know more about Nepal Tsum Valley Trek.

It’s a quiet and beautiful valley in the northern Gorkha, to the east of Manaslu. It lies bordering with Tibet against the Ganesh Himal and Sringi Himal, and Boudha ranges. A river called “shear Khola” drains through the valley.

The name “Tsum Valley” came from the Tibetan word ‘Tsombo’ (meaning vivid). The valley is rich in its ancient art, culture, and religion. The Tsum valley- also called Beyul is one of the hidden valleys blessed by the Padmasambhava. He discovered the valley when the world is inclined to war and almost forgot about the spiritual values.

Tsumba people are the true reflection of Buddhist Tibetan culture and speak their own unique dialect. They have a great faith towards the peace teaching of Lord Buddha and have prayer flags, Khata, and burning of the butter lamps in individual houses and monasteries.

Fun fact: Tsumba still practices polyandry- the custom of having multiple husbands at a time Festivals are a major part of Tsumba culture – “Loshar” is their prime festival which signifies the Tibetan New Year. They also celebrate ‘The Horse Festival’, ‘Happy Saka Dawa’ and “Faning”. Each one of these has their own significance.

Spring and Autumn is the best season for trekking in Tsum Valley Nepal- the winter is extremely cold and snowy and summer comes with monsoon rain. March to May offers stunning views of the Himal Chuli and Ganesh Himal also the rhododendrons of different colors increase the beauty of the trail. Late September and October also have a clear sky and beautiful mountain views.

Trekking permit for Tsum valley was given in 2008 and is still the least visited destination in Nepal. The trek requires serious guts and determination. The trek is about scenic travel and exploration of the unique local culture. Trekkers also encounter herds of the Himalayan Thar and Blue Sheep. There are several beautiful valleys in the way, Buddhist monasteries with the colorful flags and the Mani walls along with the beautiful shaded forest of juniper, Rhododendron, and pine. One can get a clear view of Lamjung Himal, Ganesh Himal and Mount Manaslu (8,163 m).

Being a restricted area, Tsum valley needs a special permit from the Ministry of Immigration. Further, you will also need MCAP and ACAP permit if wish to continue to the Manaslu and Annapurna region. You will need a professional guide to accompany you to get the permit.

Contact us here to book your Nepal Tsum Valley Trek. Have a Unique experience in the remote valley of Nepal with the best kinds of arrangements we offer.