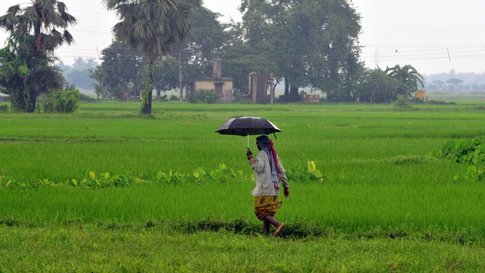 Nepal is the Trekker’s hub for a good reason. The unique and thrilling walking adventures in Nepal captivates a number of tourists each year. While autumn and spring are considered the best time for trekking in Nepal, monsoon also has its own perks. Nepal June Weather marks the beginning of monsoon in Nepal. Trekking Nepal June has its own perks- blooming flowers, green lush vegetation, and quite trials. With the onset of monsoon, the number of visitors gets thinner. And thus you can enjoy the cultural and trekking activities in the warmer month at the reasonable cost. Here is everything about Trekking Nepal June including Nepal June Weather.

Nepal’s climate varies as per its seasons and altitude- from Alpine climate in the Himalayan to the subtropical in the Terai region.

Since June is summer and also the monsoon, the weather is usually hot and wet. Monsoon blows from southeast to bring rain to the country. Thus most of the trekking trails are muddy and slippery. But the distribution of the rainfall differs in a different area as per the sea level and local topographic features. There is some rain shadow area behind the majestic Himalayan ranges that receive poor rainfall, as less as 50cm.

Also, the rain pours during the night while leaving the sky clear in the morning for the mesmerizing view of the Himalayas. To sum up, Nepal June Weather is amazing and exciting.

During June, those regions which settle in the rain shadow area can be visited. You can still explore the geography and cultural diversity of Nepal. As the Himalayan ranges block the rain, you can still be trekking in Upper Himalayan region which is not affected by the monsoon season.

The best part of Trekking Nepal June is that it rains mostly during the night and the skies are usually clear by the next morning. So, you will get an excellent view of the sunrise from different viewpoints across the trails.

Basically, Spring and Autumn are considered as the best time for trekking. However, many travelers are enjoying monsoon trekking for slightly different reasons: agricultural activities, lush vegetation, and a cooler climate. Here are places you can trek during June:

It is among the most popular trekking destinations in Nepal. The trek beings from Pokhara, the city of Lakes. The trek is relatively easy and the trekking trails are well marked. The lower region during the trek might get occasional rainfall, but the upper section lies in the rain shadow area, which makes the trek possible. Also, due to the off-season, the trekking trail is less crowded. Trekking Nepal June in this trail is fun.

This region lies in the rain shadow area of Nepal. This means with a little for no rain, it’s the ideal place for monsoon treks. Also known as the “forbidden kingdom”, Upper Mustang has strict rules and needs a special permit. Since the area was ruled by the last monarch of Nepal, it’s also historically important. The area is popular for mountain caves and the monasteries, its dry arid land and Tibetan culture of the ethnic Buddhist inhabitants. Nepal June Weather makes Upper mustang region even more fun.

The trek to Jomsom is a part of Annapurna circuit trek. It is a famous destination for both national and international tourist. The Muktinath temple in the route is a famous pilgrimage site for Hindus and Buddhists. The visit to Muktinath temple is believed to provide “Moksh” to the devotees. Another Jomsom, you can trek to the famous destination of the region named Kagbeni.

Since rains usually falls during the night, the skies are clearer by the next morning which offers the excellent view of the sunrise and mountains

As spring and Autumn are overcrowded and monsoon is considered off-season, monsoon trekking is slightly cheaper with discount in accommodation. Nepal June Weather doubles the fun.

If you have the right choice of destination, Nepal June Weather is pleasant. Trekking Nepal June is also cheap.

Contact us here and you can easily book the trip to Nepal. We can make the best arrangements in reasonable price.