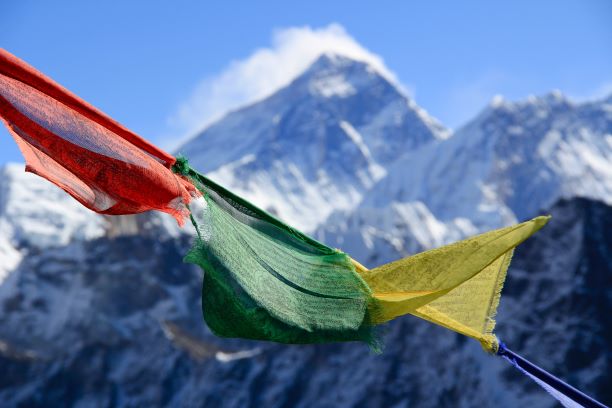 Not just the mountains but the villages also add more to the beauty of Nepal. Away from the “crowds” of cities villages that still quite away from development activities, crowd and the rush is the refection of real Nepal. Among many such villages, Khumjung village located the lap of the mountain is a prodigious one. The stories of Khumjung yeti scalp DNA tests and Khumjung monastery is popular around the world

Located in the Khumbu sub-region, Khumjung Nepal falls under the area of Sagarmatha National Park at the altitude of 3,790 meters. The villages settle in the foothills of sacred mountain Khumbi below the Namche bajar and thus called “Valley inside the Clouds”.

The village is inhabited by 1912 people, most of them of being Sherpas- it’s the largest Sherpa village in the area. Khumjung has houses of uniform structure and colors with green roofs. Life in the Khumjung is rural and based on agriculture. Potatoes are harvested during October, major trekking season in the reason.

There are prayer flags, and the Mani walls and white chortens throughout the village that reflects their Buddhist culture.

How to reach Khumjung?

Khumjung is situated 85 miles away from the Kathmandu. It’s a popular stop among the trekkers of Everest Base Camp.

For Khumjung, you need to fly to Lukla and then start your trek to Phakding and reach Namche Bazaar. From Namche Bazaar you can proceed for the trek to Khumjung and Kunde. It’s a great way for altitude acclimatization as well. After a couple of days in Khumjung, you can return back to Namche Bazaar and join the Everest Base Camp trail.

The place accommodates its guest in tea house or homestay. Rooms are cheaper as compared to food. Thankfully the village provides the facilities of internet and mobile phone towers.

The small village of Khumjung has so much to explore. Here are the places you shouldn’t miss during your visit to Khumjung:

Dated back to 1961, The Khumjung School was built by Edmund Hillary’s ‘the Himalayan Trust’. That’s why the school is also named “Hillary School”. During establishment, the school had only one classroom but now it provides a secondary level education (class 10) to 400 students.
(If you don’t know this yet, Edmund Hillary was the first person to climb the world’s highest peak, Mount Everest).

This was also founded by Edmund Hillary in 1966, in the town of Kunde. He used to recruit the volunteer’s doctors from New Zealand and Canada in the hospital. Now, it is facilitated by the Nepalese medical professionals. It’s the biggest hospital in the region that has served around 8,000 local people and trekkers passing through the Khumjung region. Around 25 patients visit the hospital each day.

It is the center of Sherpa’s culture in Khumjung region. The monastery is built at the altitude of 12,400 feet. Unfortunately, the 2015 earthquake damaged the monastery immensely which was later reconstruction by the contribution of locals. Thousands of people contributed free labor for two weeks and finance to open the monastery in August 2017.

In the cabinet of the Khumjung Gomba, there’s a Yeti Scalp in the shape of a half circle. The villagers claim that the scalp is said to come from the “abominable snowman.”

Edmund Hillary and his team found the scalp in a home of the Khumjung women. The women used to keep it as a sign of good luck for the entire village. Hillary made the offering donation to the local school and monastery to get the scalp for the purpose of examination. He then found that the scalp belongs to an animal, probably a native Himalayan goat-antelope. He then returned the scalp into the monastery.

One duplicate of the scalp also exists in New York’s Explorer’s Club in Khumjung. It is yet to be confirmed if the scalp belongs to a yeti or not, but it is worth visiting.

Ps: To get a glance of the scalp, one should donate some cash to the monks in the Gomba as per their own will in a Nepalese rupee.

Fasinated by the stories of Khumjung? Book all your trip to Nepal here.

We offer the best kind of trekking deals.