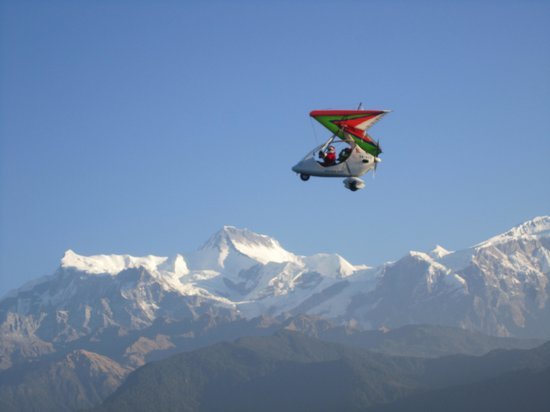 Pokhara is situated just 200 kilometers west of Kathmandu. It is blessed with natural adornments in abundance. Pokhara is flanked by panoramic Himalayan peaks of Manaslu, Annapurna, Machhapuchhre, and Dhaulagiri and it is embedded by emerald lakes. It’s also the home for adventure junkies with the thrill of Rafting, Paragliding, Bungee jumping, zip line flying and most importantly skydiving possible.

Skydiving Pokhara is a traditional jump- You will make the jump from an altitude of 11,000 to 13,000 feet. With the majestic peaks smiling at your backdrop and the Pokhara valley sprawling below, you take a leap from the aircraft, freefalling for a few of seconds (30 to 40 seconds), before your canopy opens and you land gently on the ground. With no doubt, it would be the life-time memory you will be blessed with.

The jump is made from Pame Danda Dropzone, west of Phewa Lake.

The plane used for skydiving in Nepal

The helicopter used for skydiving in Nepal is AS 350 B3/B2 Helicopter piloted by experienced skydiving aviators.

Is Skydiving in Nepal safe?

If you are talking about the technical safety yes it’s safe.
But since it’s an extreme sport, like any other adventure sports, has risks. But with a skilled tandem instructor, your jump would be as safe as possible.

Skydiving in Pokhara is not a regular event. It is only conducted a couple of times, usually in the month of November (sometimes December).

Price for Skydiving in Pokhara Nepal?

I won’t say its cheap, but compared to $25,000 Everest skydiving, Pokhara is a lot affordable. Actually, the cost for skydiving in Pokhara is less than US$1,000 for foreigners and Rs7500 for Nepalese.

You can leave any queries here.