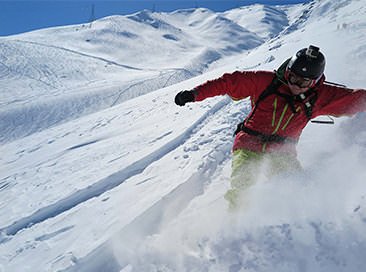 Nepal’s mountains is the ultimate destination for all the planet’s adventure-addicted. Ski and Snow Boarding Nepal is a major attractions for Nepalese. People from all nook and corners of the globe land here to test their will, wits, and stamina on the most intense playground that mother-nature has to offer. Hundreds and thousands of tourist spend millions for this experience with higher Himalayan ranges each year. And Nepal welcomes all of them.

But looking back, the fun has just being- the history of snow boarding in Nepal is short. In 1971, Japan’s Yucichiro Miura made the first attempt skiing down Nepal’s mountains. It was a feat shown in the film- The Man Who Skied Down Everest. Even after the film Nepal’s poor infrastructure and management made it a barrier for the skiers. Each year, only handful of tourist used to travel a long way for the purpose.

Ski and Snowboarding Foundation of Nepal made a claim to have conducted the very 1st Nepal Ski Expedition with the team of 5 fully trained skiers from the summit to Mera la 5200m on the 17th of September 2016.

Note that true ski descents are difficult in Nepal. The snowfall cover is greatest an only during few months of the year- all year adventure is not possible. So, Skiing means only two months on a mountaineering expedition while other months is about getting hit by the bad weather and altitude sickness. In the likelihood of an emergency, the case can go so worst that along with training in avalanche safety one should also be equipped with avi-beacons, probes, and shovels. The long ascent days had made it tougher.

Thankfully, back some years use of helicopters has fully changed the experience of snowboarding and skiing and in Nepal. You can now ascend up to 5,800 meters, and with a little climbing, go higher. (Note: Nepal’s snowline doesn’t start before 3,500 meters and that is already higher than any summit of a ski resort in the world).

Places for snow boarding in Nepal

Ski and snow boarding Nepal used to be only “tourist” thing until few Nepalese adventures prone recently got involved in it. In the February end when snow is think in the Central Himalayas, kalinchowk of Dolakha was also full of snow. And with no delay some agencies took their chance. Due to its easy access from capital, Kalinchowk is packed with internal tourist. And the Ski and snowboarding team used the opportunity of the snowfall to organize ski training in Kuri. But due to low altitude (only 3450m), the ski season is relatively short in Kalinchowk. But no doubt, it made a major contribution in introducing this mode of adventure to our country.

Book your snow boarding Nepal trip here. If you have queries, book your trek here.