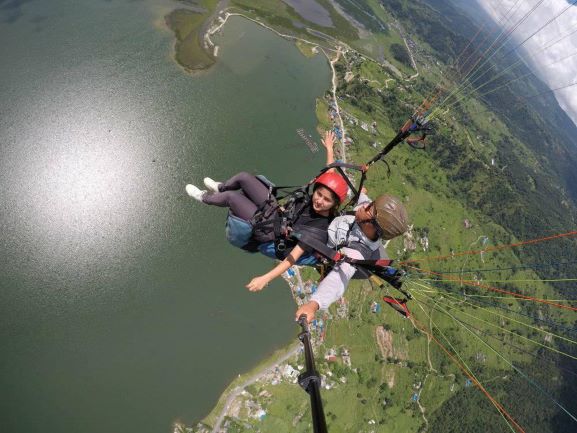 Pokhara is among top 5 commercial paragliding locations in the world. And why not- where can you see the tallest Himalayas Parallel and crystal clear lake below? And with all redress ingredients-sable thermals, convenient take-off, and landing zones, nowhere could be better?

Views for Paragliding in Pokhara Nepal

The flight from the hill-top reaches an altitude of 2,500 to 3,400 meters. The height is enough for offering awesome views of Annapurna, Fishtail, Dhaulaghiri, and Manaslu. Below, you can see the tiny Pokhara Valley with Phewa Lake as a center. The vegetation and greenery just add up to the right mood.

Note: If you want a get a free tourist guide around Pokhara, do email us at traveldiarynepal@gmail.com. We are the group of students who are excited to show you around our city. Also, if you want to book any hotels or sports around the city, just let us know. We have some best deals.

Where to go for Paragliding Pokhara?

Paragliding at Pokhara takes off in Pokhara at Sarangkot. Sarangkot is a hill top-station that is 25 minutes jeep drive from lake-side. The spot is 1600m above sea level- an ideal height for take-off.

Is paragliding at Pokhara safe?

Yes, I must say Paragliding at Pokhara is safe. The equipment used and safety measure taken is one of the finest in Nepal. So, you have to worry less.
Well, it’s an adventure and I can’t keep a bet that nothing can go wrong. Isn’t the chance of an accident that adds real fun to adventure sports? But the chances are least in Pokhara. And, make sure your company makes reasonable insurance before going.

Paragliding in Pokhara price for Nepali is around Rs 5000 per person for 30 minutes flight. For the foreigners, it’s slightly high.
Travel companies take around $90 US per 30 minutes and $140 US per 60 minutes for a Tandem flight. For solo flight (only if you are trained) it’s about $70. The packages also includes a drive to Sarankot from Lakeside.

The best seasons for paragliding Pokhara Nepal are autumn (September to November) and spring (March to May). Winter would also be ideal but avoid monsoon rains. It is also the best time for trekking around Pokhara.

BEST TIME OF DAY for PARAGLIDING IN POKHARA

Flights from Sarankot are operated 3 times a day: 10:00 a.m., at 12:00 noon, and at 14:00 p.m.
Among the three, the morning flight is pretty calm as the necessary thermal hasn’t formed yet, but the view is mesmerizing. After 12:00, when the sun has warmed and the flights are more turbulent.

So, that was all tell you about .Hope you have an amazing experience during your tip. Book your paragliding trip to Pokhara here. We make the best arrangements.